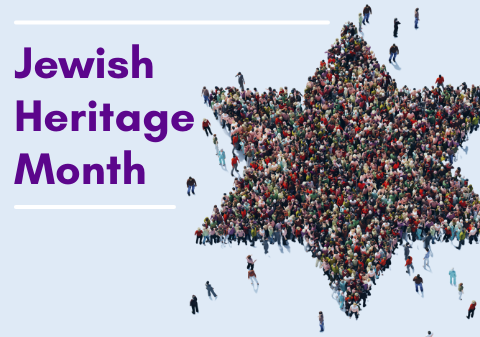 May is Jewish Heritage Month in Canada. In recognition of Jews who live in Canada, the fourth largest Jewish community in the world, Humber Libraries would like to shine a light on 5 Jewish, contemporary writers from the Greater Toronto Area, who push boundaries and challenge convention in their writing, expression and politics.

1. David Bezmozgis is not only the creative director of Humber School for Writers, but he is also an award-winning writer and filmmaker. Enjoy reading his short stories and fiction, written with beauty and humour, about the Jewish immigrant experience.

2. Rachel Matlow is a radio journalist, editor and producer, who's new memoir, Dead Mom Walking: A Memoir of Miracle Cures and Other Disasters, won the Vine Award for Non-Fiction in 2021. They also have a radio documentary, Dead Mom Talking, with recorded conversations on life, loss and grief, between Rachel and their mother.

3. Sheila Heti is a Toronto-based author who has written ten books of fiction for both adults and children. She is also a public speaker, and the founder of Trampoline Hall, a barroom lecture series in Toronto, started in 2001. Her writing is often funny, whimsical, philosophical, and avante-garde, all at once.

4. Sidura Ludwig is a novelist and a short story writer. She is also a graduate of Humber School for Writers. Her recent work, You Are Not What We Expected, won the Vine Award for Fiction in 2021. This collection of short stories spans a 15 year period with a multi-generational Jewish family and their neighbours, exploring the secular and religious connections and tensions that exist within a community.

5. Naomi Klein is an award winning journalist, activist and author. She is currently a UBC Professor of Climate Justice and the co-director for the Centre for Climate Justice. She is an outspoken critic of capitalism, corporate globalization, nationalism and more, and is a strong advocate for systemic change.

Enter your e-mail address to receive notifications of new posts by e-mail.